Premier League Footballers play a round of Footgolf 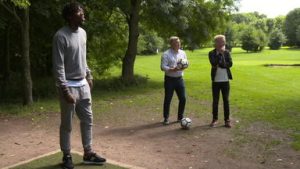 Watford new boys Will Hughes and Nathaniel Chalobah joined Geoff Shreeves for a round of Footgolf ahead of the new Premier League season.

The duo are new arrivals at Vicarage Road this summer, with Hughes joining on a permanent deal from Derby while Chalobah is on a season-long loan from Chelsea.

They could both make their top flight bows in Watford colours when the Hornets host Liverpool live on Sky Sports Premier League on Saturday, and joined Shreeves to tackle the Footgolf course and chat about their moves.

Speaking about making his Premier League debut, Hughes said: “It’s been spoken about over the last few years with me and to actually get here is a massive relief so I’m so excited to see what it brings.

“Watford is a big family club. I played against them numerous times in the Championship and heard good things about them and I got good vibes from them so it was a no brainer when I heard they were interested.”

Chalobah added: “I got a little taste [of the Premier League] at Chelsea last year and it made me hungry for more. It was an opportunity I couldn’t really turn down because I’d been at Watford before which was a big part of me coming back.”

Read the full article here and watch the video